The World of Indian Cricket Today… 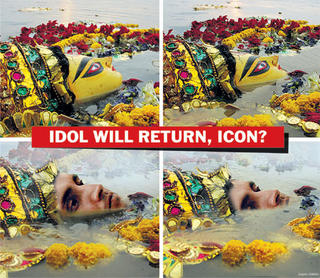 One of the best symbolic representations I have come across. Telegraph hits the bulls-eye. The picture speaks for itself, need we say more? We have all heard and said enough.

Dravid gets the thorny crown once again. I wish the selectors & the board would show some faith in him and give him a longer tenure. Why is the sword hanging over his head perpetually? Be a man and take a call, why are we such cowards in taking touch decisions and who are we scared of? Ganguly and Dalmiya! Oh give me a break!

Sadly the way Dravid has been appointed, Ganguly will always feel it is because he is out of injury. Well for a fact that is not so, and the selectors have no guts to admit it in the open either. Harsha Bhogle puts things in perfect perspective as always.

I hope sanity prevails over the selectors as well as Ganguly. I’m just glad you are learning from some of the mistakes you committed. I really wish you don’t say anything now. But Greg Chappell prefers to air his views.

The team is announced and Sreesanth gets the nod. I’m looking forward to seeing this young lad. Hope that Ajit Agarkar’s form with the bat does not desert him and looks like young Uthappa will have to wait a little longer with Venugopal Rao and Suresh Raina having a good challenger series as well.

The Challenger Series Final proves to be a dampener compared to the league matches. India Seniors sail through and Kaif must be a relieved man.

Down Under it’s still time for our Indian boys to prove their mettle, Gilchrist and Hayden have hammered tons; they seem to have left their Ashes debacle behind. The ICC Super Series – Test Match looks to put up a better show than the ODIs did.