When I met the “Other GOD”

Life is made up of our dreams – big and small. The big ones keep you going in pursuit of bigger things. It is the small ones that matter cause they bring a smile on your face at unexpected times but when you need it the most. In the pursuit of accomplishing the big one we often forget the little ones that have come true and weigh much more than that one huge one.

I’ve had many such ones – but the one that came true on Tuesday 20th April probably took the cake.

I’ve dealt all my life with people wondering how can a girl be a cricket geek and to add to it how the only person I’ve idolized in life is no Greek God from Bollywood or Hollywood or one of those oh-so-cute cricketers that all girls seem to love. An idol for me is someone you would love to emulate , someone you would see yourself be one day.
Well that was me – the incorrigible geek. I still am.

I’ve followed his writings and commentary ever since I started watching cricket but never got a chance to meet him. It was my terrible luck that he could not make it as a judge to the “Harsha ki Khoj” auditions that were held in Mumbai. I remember being thrilled to have made it to the city rounds and disappointed at not meeting him at the same time.

Managed to interact with him on mail and he was generous enough to spare his time, read some of early articles and give his honest feedback. So I never pursued sports writing as a hobby and stuck to my cruel corporate world.
However this blog gave me a new avenue where I continue penning down my thoughts to a few loyal readers and the bliss I experience cannot be expressed.
So imagine how thrilled I was to able to meet him after following him for 18 years! Here is my little story – of a small dream come true.
This opportunity was thanks to a friend AR we were introduced to by my MBA batch mate just a couple of months back. And she was kind enough to take all the efforts to arrange passes for us.

We headed to the Dubai Sports City Cricket Stadium – a world class facility. We were taken to the Royal Box where it was the meet and greet program. The box carried clippings of some famous cricketing events – the famous Aus-SA 1999 WC semi-final. The entrance was adorned by the two greatest bowlers Murali and Warne and the two greatest batsmen – Sachin and Lara to have played this game. The walls carried bats signed by the Aus and Pak teams that played the inaugural T20 game here in 2009. The score sheets of the game were also placed beside them.

As I was taking the snaps, a lady tapped me from behind and asked are you Minal. I said yes and she said I’m EH, I guessed it had to be you cause only one lady hounded us for passes and there is no lady I know who is this crazy for cricket.
As we were having our drinks – another organizer came in and walked up to me saying – Come let me introduce you to Harsha cause I told him that you have to meet your female fan – the only one who was ready to buy passes for this event.
I could not believe myself when I was introduced to Harsha Bhogle – a man and writer I’ve admired for decades. He recollected the mails I had written and we had a small chat. What an amazing guy , down to earth and humble. I finally got his autograph on his book I own “ Out of the Box”. He then moved on to meet other guests and I could not even scream! Damn I wonder why we grow up at times! 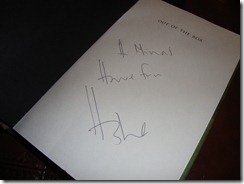 We then preceded to the cricket ground – it was the first time I had stepped into a stadium ground and gone anywhere close to the pitch! BLISS!

All of us took our places and Joy Bhattacharya came on as the host for the evening. After a few minutes Harsha took over and we do not know where the next 2 hours flew by.

Harsha started off narrating experiences from his cricketing career and sharing clippings with us. I’ll write about a few in short.

On why he envies Ravi Shastri:
“Ravi is always there when records or history is being made – Remember Yuvraj’s 6 sixes of Broad in 2007 WC and also when Misbah mistimed that shot deceived by Joginder Singh’s non-existent pace to give a catch to Sreesanth and the World Cup to India as well.”
On why India would’ve been happy if Sania had married Misbah instead of Shoaib:
“All of India loves Misbah – he is their favourite ( after all he handed the WC 2007 victory to India)
On how Anil Kumble changed his approach to T20:
When T20 first came in Jumbo said,”What is this T20, I can bowl 20 overs on a trot.” During season 2 he said,”What matters is not the 4 overs but that one ball. You play one ball at a time, a dot ball is a win – that is the key to winning this game.”
On what he learnt from Steve Waugh:
Steve said, “I look at the body language of a player. I could always make out when Ganguly was in a defiant mood and when he was nervous. The more he blinked the more nervous he was.”
More on attitude from Geoff Boycott:
When I used to bat I would run onto the field as soon as the opposition entered the ground, my partners often asked me why are you in a hurry. I’d reply, “ I don’t want them to feel they are ready for me, I want them to know that I’m ready for them”
On his first experience with Siddhu as a co-commentator:
Siddhu’s suitcases were full of 2-3 huge registers with loads of handwritten stuff. When they took to the mic in the box , he ticked of 5 odd phrases from one register saying that he would be using them in the next half hour. So Harsha asked,”What if the situation does not warrant their usage?” To which Siddhu replied,”Well that is tough luck for the situation,not my problem.”
One of the Siddhuisms he quoted,“Shivsunder Das needs to get up on his toes just as the little kid does when he is has to pee in the urinal.”
On Inzamamam Ul-Haq
The slowest batsmen with the fastest eye. Watching Inzy is like watching a movie in slow-motion.
Inzy once jumped in the air to avoid a ball aimed at stumps, the ball hit the stumps and he was given out as his feet were in the air. Next match he saw the ball coming and hit it with the bat to direct it elsewhere. He was again given out. At the press conference he says,”I don’t understand these rules – I avoid the ball I’m out, I hit the ball I’m still out!”
Wasim Akram narrated another one – Inzy and he decided to take a single irrespective where the ball went. Wasim hit and rushed to the non-striker end. Inzy at the non-striker end kept looking for the ball, and then turned around to find Wasim near him and said, “Arre Wasim Bhai, aap yahan kaise? (Wasim Brother, How come you are here)”
But he remains one of the most quiet, polite batsmen to have walked to the field – so if he ran into the crowd to hit the guy with his bat, you can imagine the provocation involved there.
On the GOD:
Sachin is a restless bloke when he is not playing cricket. In the first IPL season he sat out 7-8 matches. While a match was on, he picked a bat – held the handle close to his ear and tapped it. Then took another one and repeated the same. Then he gave the second bat to Bravo and told him use it when his turn would come.
Bravo asked him,”But master what do you see?” SRT said,”Just listen to me’. Bravo insisted,”Master tell me what you see.” SRT removed the grip of both the bats and showed the markings of No1 and No2. He had given the No1 bat to Bravo. He said,”That is my match bat and the other is my practice bat.”
You see “Bats talk to me”

Harsha is right when he says that forget you and me, the one man who will be most unhappy when SRT calls it quits; will be SRT himself, cause he does not know what to do without his cricket.

On why Sachin never bats with a runner:
“The runner will always be behind me while taking a single. When I take strike I know what the bowler will bowl, I know exactly where the fielders are, I know how hard I’ll hit the ball. My single has started when I take strike – so tell me how does a runner help my case?”
On Hansie and Azhar ( My favourite of all the little tales he told)
Two very similar men – deeply religious, fantastic team players, extraordinary human beings – just one weakness – Money!

Harsha Bhogle entertains with his intelligence and how rare it is to find that quality today where everyone is looking to score at any cost. The dignity and the cultured humour stands apart. There are no insults, there are no condescending talks, there is only humility and love for the game.

He was asked his view on match-fixing in the IPL and he says I will not believe till evidence is produced, but till then lets us remember that 2 men of high integrity will walk on the pitch on 21st and that sight should restore our faith again in this game.

On why I idolize him:
His intelligence and his ability to speak his heart without hurting a soul. His strong belief in his middle class roots, his humility to admit he was lucky(cause not all can be that lucky as per him) in the field he chose. His practical approach, his no nonsense attitude. His simplicity to converse in our mother tongue Marathi when he heard MDH and me converse in Marathi. His patience to spend time with his fans without ever giving the impression he is doing a favour on them. Yes, if you need a lesson in humility you need to meet this man.
Before I take leave, here is something I have to share with you all. At the end of the session, the Q & A was thrown open to the audience and I got the chance to ask the first question. Here is what I asked:
Harsha we have grown up watching the Fab Five – Sachin, Rahul, Saurav, Anil and Laxman. For my generation,  Indian cricket has been defined by them – we simply adore them. But tell me who among them is your personal favourite?
To which he replied: Anil Kumble for the wonderful human being and cricketer he has been. The ideal role model for a generation to come.
My guess was either Dravid or Kumble and I’m glad I was right about that:-)

He liked the question I asked and here is what I won! 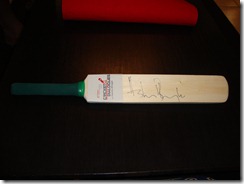 An opportunity of a lifetime, a memorable evening – thank you AR and thank you Harsha!

You wrote in my book “Have Fun”, well I always have, always do and I always will – Cricket pretty much takes care of that:-)

A Tribute to the True Gentleman in this Gentleman’s Game