School vacations were equally distributed with spending time in Pune and Ahmednagar. Ahmednagar is my aunt’s home. I have lovely memories of that house. It is in the main town of Ahmednagar, the town with loads of dust and heat. The house was bang on the roadside with Baba Aajoba’s small electrical shop in the veranda, the passage led to an open area in the centre of the house where the sun hit hard. There was a huge black jar kept for drinking water in which the water remained as chilled as it would be when kept in the freezer. The 4-year old me would ask Akka innocently, why her fridge was black while the one in my home was white. This one looks dirty, let me try scrub it and I would try scrubbing it for hours while all the elders would watch the fun! There was a small open water tank on the right side,which we term in Marathi as Haud. The kitchen was on the left hand side of the open area where Mami made her awesome food, especially her famous Khichadi. And finally, the main hall in the front, where Akka, Mama and Baba Aajoba would be seated watching TV.

When we cousins got together, we used to have a blast running around the small house especially the terrace. Baba Aajoba would be fed up with us constantly using his shop as our play area, climbing up and down the staircases and shouting hoarse from the terrace and playing games in the room on the terrace. At the end of the day, we would be dead tired and then sleep at night on the terrace cuddled up in Akka’s arms. Summer or winter made no difference to us – the bliss of being with loved ones makes you forget everything.

Mami would get me the fresh, hot diamond shaped Khari biscuit every time I visited Ahmednagar. Akka would take me around to meet her relatives and pamper me. I liked tagging along, I loved being pampered. She would bathe me every single day and scrub real hard with shikakai. It was her favourite!

We would often visit her brother’s fields and enjoy the amazing sugarcane juice and rides in tractor. She would keep getting goodies every single day that I spent in Ahmednagar and make me feel like one important lady!

Once I moved on to engineering and MBA it became increasingly difficult to go to Ahmednagar and spend time with her. Mama changed the structure of the old house and we all felt a bit hurt. It was no longer the place we identified with and with that we felt our memories were lost. I lost the longing to visit and stay there. So my visits were sporadic and I only managed to meet Akka when she visited Talegaon at her elder daughter’s ( my aunt’s sister) place.

Mama, my aunt’s only brother passed away suddenly in Nov last year and with his demise Akka lost her will to live. I had met her last before I left for Dubai and every time I visited Mumbai I could not find the time to go meet her in Ahmednagar. She was getting increasingly weak and could not travel. Finally this March I squeezed a day, and went along with my mom and uncle to meet her and Mami post Mama’s death.

Her memory had gone weak I was told but I was gladdened to see her recognize me and speak with me. I don’t know what it was but I kept convincing Didu to come down to India for her delivery and not call my aunt to UK. I’m glad she did cause my aunt managed to meet her mom more often than she would’ve thought.

Akka passed away 2 weeks back on 22nd April. If Mama was around maybe she would’ve lived a few more years, but somehow the death of her only son made her feel guilty and she lost her will to live.

I miss her, it’s not easy to cope up with the death of grandparents. Didu and I’ve lost two in a span of 6 months – two wonderful ladies who loved us loads. They both passed away on a Thursday and ironically on the birthdays of their children.

I did not spend much time with Akka in the last 7-8 years as much as I would’ve liked to but I never stopped thinking about her. She loved Black raisins – I’ve sent a small pack for her every time I visited India. Had bought this time too and forgot to take it at the last minute. For the first time I would’ve given it to her myself and seen her smile – guess that moment was not there in my destiny.

I still thank god cause I got to meet her, sit with her and spend some time with her. She was a lovely lady, she reminded my mom-in-law of her own mother.

Akka I miss you, never been able to express myself enough, to you and neither to Mothi Aai, but you both have given me valuable lessons in life on how I should be to my grandchildren.

Thanks Didu for sending her snaps, the first one in her young days and the second a few years back. 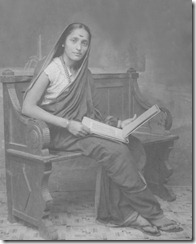 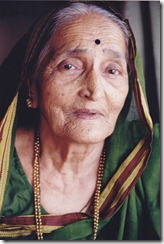